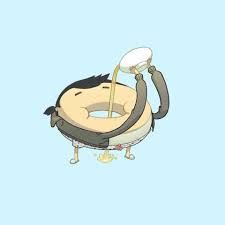 First the picture. Last week "national running day" was June 3. "National Donut Day" was June 4 or 5. Fitting. Oh and the picture...the human body is essentially a donut. Skin, muscle, organs, and bones with a hole through the middle. Yep, your mouth all the way to the other end...an actual hole in a donut. Not to be confused with donut hole, which we used to get on the way to early morning fishing trips as kids. Keep that in mind, it's part of this post.

I thought I'd post a bit more about the "Re"birthday and the after effects. Because really, this is a way to cure leukemia, but we've still got a ways to go. I say 'I' would post because Amy isn't much on talking these days. She's got a sore throat that feels like she's swallowing razor blades. I'm not being dramatic. Pudding, ice cream, and popsicles are about all that she can handle right now.

The regimen she was on this time, including the radiation, was certainly different. I could list the litany of potential side effects here, but it would be a list that just goes on forever. One of the most common side effects is 'mucositis'. Here's the wiki page.

Back to the picture. Mucus pretty much goes from your mouth to the other end. A few days ago, Amy said her cheeks were sore and it felt like her tongue was too big for her mouth. Then she got a bit of a sore throat. Then it raged. Mucositis.

It has been a rough several days for Amy. She has a week or more left to go in this phase. Things will stay about where they are now, maybe trend a bit worse, until the stem cells engraft and her white/neutrophil counts start to rebound. Clean out the old to make room for the new.

Truthfully, every "little" thing counts. And one of those "little" things have been the cards and messages that people have sent. We don't have the space for them in the room.

Yesterday one of the CAs came in. There was a morning show on, and the CA asked how so and so stays so thin. Amy's reply was "mucositis". Can't eat, you lose weight. A bit of a had to be there moment, but the three of us got a bit of a chuckle.