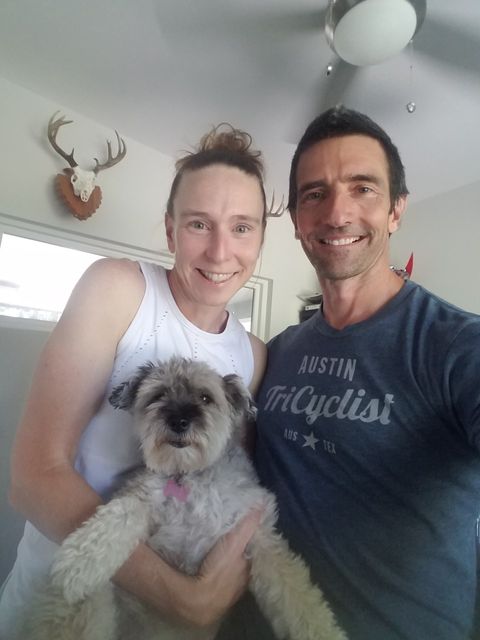 Today is the 5-year anniversary of Amy's stem cell transplant. 5-years ago this was considered her "re-birthday"and was really the final step in her treatment for acute myeloid leukemia.

If you followed then, you know that the treatment ended. The recovery did not nor did life after cancer. That is the definition of survivor, life after diagnosis. I tended to think that it was life after treatment, but early on we noted that being a survivor started the day of diagnosis.

Cancer will be part of the story, but not THE story.

I've been meaning to write some stuff since the last entry probably 3 years ago.

I wanted to write some stuff about what we were doing for work, exercise, and life in general.

Focus on the the basics and be consistent.

We have a dog now, she's awesome. Thanks Rita and Adam.

Avoid negative energy. I need to work on that.

It's ironic to be celebrating right now with all that's going on.

I wanted to write more.

We were called one of the "OG" couples on the Austin Triathlon scene. We talked with Erin Truslow (The Big Pistacio) about growing up competing, cancer, and retirement. We're biased, but it's good, really good.

It's nice when you get a note or two or comment or two wondering "What are you up to?" It also seems to be a reminder that there hasn't been an update for quite a while. My goal was 1-2 a month, and I've let that slip. The last one was 2 or more months ago. In that time I've been to a "real job" or "grown up job" daily, Amy has coached daily and had several meets, and it's a bit like Groundhog Day.

By the way, the real job or grown up job comments are annoying. Stop saying that.

It's been a weird couple of months. I wrote that our October sucked. And then there was November, and that was weird. 1/2 of the country who have said it's been the worst 8 years ever were happy. The other 1/2 are already saying that the next will be the worst ever. Either way I'll put my pants on one leg at a time and go to the job that I enjoy daily. Amy will put her shoes on one at time and coach. We'll keep exercising and hopefully get the home remodeled like we've planned for the last 4 or so years. We'll try to make our groundhog day continue.

Amy and I met at the pool. She was coaching at Great Hills Country Club for Capital of Texas Aquatics. I was working at URS as an Engineer focused on air permitting for industrial clients and mercury removal for coal fired power plants. Sometime after that, we both left those jobs to race as professional triathletes and coach in person and online.

Monday, we will go back to those roles. Or rather, I'll go to an office for the first time in awhile, and Amy will continue coaching on deck.

Amy, with a little help from me, has been coaching at the Pflugerville satellite program of Longhorn Aquatics. She coaches the Bronze and Silver groups. She says that there are days where she is a great coach and others where she feels like there's work to do. But, she's good at it, very good. I've seen it.

I've continued to coach athletes remotely online and on-deck, and I'm good at it. I'll continue though with a smaller group. I'll sum up the season over on the triathlon blog. Monday November 14th some of that will change. I'll put on business casual clothes and head to an...

It's been awhile. Almost 2 years exactly, since Amy and I lined up at the same race. Or lined up for any race, besides life, for that matter. Calgary 70.3 2014 was the last time we raced the same race. I would finish 3rd with a kind of wonky calf that would feel like it was going to take me out of IM Wisconsin a couple of months later. It didn't, and I finished 2nd at IM Wisconsin. Amy would finish 5th at Calgary, not quite high enough to garner her a spot to Kona that year. She would race a sprint race in October of that year knowing something just wasn't "right".