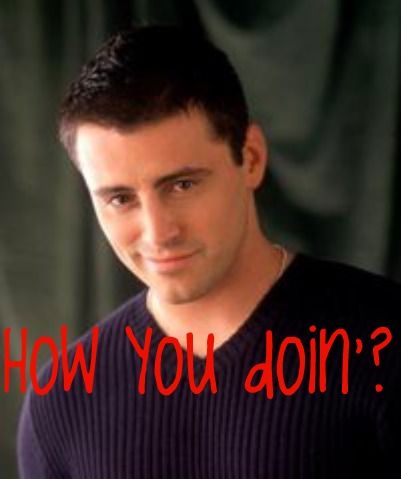 A while back I wrote about the most common comment that I generally received: Take Care of Yourself. That post is still very relevant. I could do better with my staying active goals. Compared to the average American I do really well. I've got quite a few 'zeros' in my so called workouts. I was swimming very well, probably better than ever, in preparation for the USMS National Championship swim meet. And, then things took a turn and we ended up in Houston for what was supposed to be the start of Amy's next phase of treatment. I didn't swim the meet. That was a couple of weeks ago. We (really Amy) are still in hurry up and wait mode as Amy, along with all of TX, seems to have been stricken with allergy and sinus issues. We're looking now at maybe May 17th for an admit date...

The question that I have received most recently has been "How are you doing?" You know, like Joey on Friends or the Bud commercial.

This week is 'Caregiver Week' at MD Anderson. I have not attended any of the offerings specific to this week, but they are there. I might take them up on the chair massage. I 'should' (a word I try to minimize using) have gone to the meditation one. The question of 'How are YOU doing?' is one that is answered in a variety of ways depending on the day.

Last week, a triathlon media outlet wanted to chat about how I managed everything...how was I doing? But, I wasn't much on talking last week so we didn't connect. I've had several of those requests. A few I've done. One request in particular that was less tri and more of a general (national news) online site, but I didn't really like the premise of the request so I declined. It was nice that they picked up Amy's story, but again I didn't like the premise of the article.

But managing everything. Amy and I talked about this. And we notice as we walk the halls of MD Anderson. It's simple, but it isn't. To borrow another cliche, you 'just do it'. It is a choice, but not really. And you can see it in most people around us. They 'just do it.' Everyone has a story and everyone is balancing something. Some more than others.

I get tired of the phone. Talking. So, I end up texting. One of the people that I text with the most is going through the something similar to us. She's a breast cancer survivor. Her husband was diagnosed with AML shortly after Amy. He's on a different path right now, and is not going for a stem cell transplant. They have an 18 year old son who is a senior in high school. A daughter in college. Works full-time. We met while her husband and Amy were at Seton. One of those 'How are you doing?' questions in the 'kitchen' at Seton in Austin. So, we trade texts a few times a week to check in and see how things are going.

When I look at her list, mine seems reasonable. As I have said I'm in a decent spot right now on one hand and a difficult one on another. My coaching is flexible. I can probably take on a couple more clients. We have had a lot of friends and family and people we don't even know help out. Truthfully it varies. There are days where I am insanely productive. And there are days when I wander through the day accomplishing absolutely nothing. Still others we navigate the halls and waiting rooms at MD Anderson. I like to think, that if our situation were more 'normal' and not such a roller coaster that I would have more productive days and fewer nothing days. But then I also ask what is normal? Several friends of mine and I have determined that so called normal is really f-ed up these days.

"How are you doing?" It varies, we deal with it. I'm reminded daily in one way or another how seemingly crazy the world in which we live is. My post has rambled again. But next time you actually ask someone how they are doing, take a minute to actually consider how they might be doing. Empathy. Put yourself in their shoes.