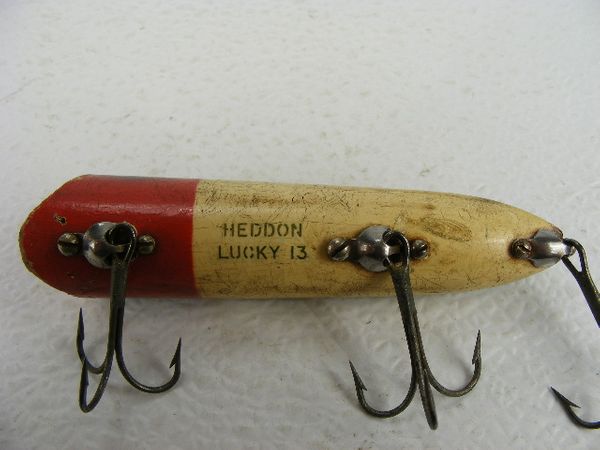 I had a #GrumpyMarsh blog started for this week about things that I think really matter, but don't seem to really matter if that makes sense. I thought better to change it up a bit since there's enough grumpiness in the world already, Adding to it would do little to help things. At times it's tough not to be a little grumpy when you walk in and out of a cancer center daily.

"If you want others to be happy, practice compassion" was the next to last line on a flier I picked up the other day. Fitting.

Fitting also that I waited to post this week's entry since it is Day #13. I've seen it as a lucky number since forever. I had to google "Lucky 13 lure" because it didn't even register when I googled "Lucky 13" for this week's picture. Apparently it's a "Vintage American" clothing company. Lucky 13 for me was a fishing lure that we used to use. An old one from Heddon is pictured. 13 is a prime number as well as a fibonacchi number...two nearly useless facts that I didn't need to google. Though I did need to google the spelling of fibonacchi.

A week after the Day #6 entry we have Day #13. Today was the first day since June 2 that Amy has any white blood cells show up on her daily labs. 0.1.

"Normal" generally ranges from 3.5 to 10 or so. I put " " around normal because a lot of times a single point in time it not enough to give you an idea of anything unless it is way out of normal. The following is not medical advice, just our experience. We had been getting self-directed blood tests throughout the year since we have spent summers (3 of them) in Flagstaff, AZ which is at 7,000ft altitude. That was important because we wanted to see how or if we were getting an effect from the altitude when training...good or bad. My hemoglobin and hematocrit increased while at alititude. Amy did not see much of an increase at all.

Some of this is old news. We did notice with her 2014 tests prior to leaving a slight decrease in a few of her blood counts. After training a couple of months, an Ironman, a case of the shingles, and a couple of months of rest...a follow up test showed continued decreases, Hard or heavy training can suppress the immune system as well as suppress some blood counts. Since there was a worsening instead of an improvement after an extended rest, we went to see the hematologist. With 1 single point it might not have seemed 'that' abnormal. But with more than a few data points, things were trending in the wrong direction

On the Stem Cell Transplant floor at MD Anderson, you hear quite a bit about blood counts. "His platelets rebounded to 200 by day 60" was one of the comments I heard when 2 caregivers were talking about the recovery of 'their' patients. It's like code. "Oh, my WBCs were 2.1 by day 15" might be something you hear. "What were my counts today?" becomes the topic of conversation.

"Were her counts still 0.0?" has been the question the last few days. Based on a few of the papers that I have read online about cord blood transplants I've found it takes longer for white blood cell production to start and "engraftment". For just over 2 weeks Amy has had a white blood cell count of 0.0. This morning it was 0.1. That is a single point right direction. From a 'non-detect' to 'detectable'. We'll know more tomorrow and hopefully it keeps rolling. As the WBCs continue to rise, specifically her neutrophils, the mucositis should go away. That means the pain should go away. That means some of the pain meds will go away. And that means that there shouldn't be any medicine related vomiting.

The last line of the flier said "If you want to be happy, practice compassion."