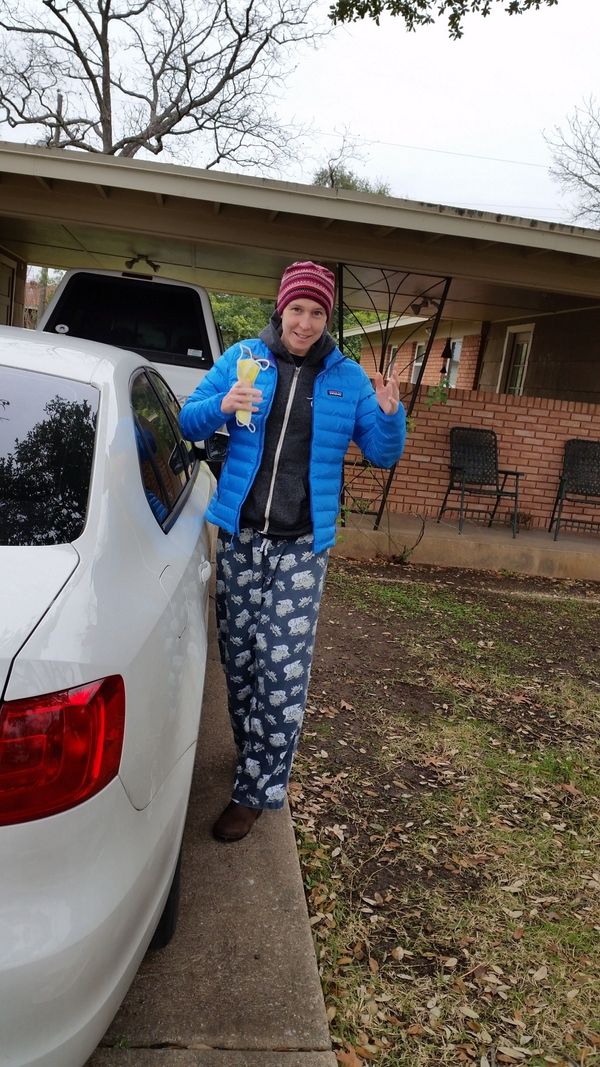 Sunlight and Outside Air

Amy left the hospital today. It was the first time in 6.5 weeks that she was able to get outside, breathe non filtered air, see whatever natural light there was today.

Today was good news. Yesterday Amy had another, I think that is 5 in total, bone marrow biopsies. This one was 21 days after she started her 2nd round of induction chemotherapy . The preliminary results on the blast count in her latest bone marrow was at 1% or less. That means that her Leukemia is in remission right now. A bit of background...

I didn't blog last week. No reason. I've got a lot to write and not a lot to write all at the same time. Blogs are so outdated. There are only a select group that actually read them or have the attention span to get through a blog. But, I'll continue to write and post updates here, and even though posts might get edited a bit, they're pretty well written in one sitting. Besides helping center me, the role of this writing is to carry you along this journey as well.

Last week was challenging. When you are waiting on results, we've found it's a bit like lining up in front of someone who 'might' punch you in the balls. Or, they might give you a hug. Last Thursday, we got what felt like a punch to the gut. Not quite the balls, but close. The first bone marrow biopsy after chemo is usually done on day 14 after the start of the induction chemotherapy.

After the 2nd round of induction chemo, Amy's blast count was around 10% following her day-14 biopsy. That's 5% higher than needed for the Leukemia to be considered in remission. There's some sciencey stuff about the age of a white blood cell, size of various stages of white blood cell development, size of leukemia cells, etc. And, even though I am science minded, I'd be potentially misleading or miswriting if I continued to try to explain it. Suffice to say that when your Dr. says he's concerned...you become concerned. That concern led to tears on January 29.

Over the past week or so, Amy's counts, the same ones that you see if you get a CBC, have rebounded to healthy levels. Levels that are 'normal' or 'better' than when she was admitted. Though it didn't tell the entire story, it was encouraging. Encouraging because her body seemed to be producing what appear to be generally healthy cells. That was why she had the 5th biopsy done 21 days after this second round of chemo. Mostly encouraging because they found a low enough %age of blast cells to be considered remission. And, Amy got to come home for a few days before the next hospital visit.

Like anything, you learn as you go. Whether it's starting a new hobby, sport, job, etc. You learn. For us lately, it's cancer. 1 round of induction seemed scary enough. 2 rounds and you wonder if things are working. But then you talk to someone that took 4 rounds. My brother told me about a vet client who had a son that took 5 rounds of chemo to hit remission. As targeted as therapies can be, you still learn that it is very individual as well. Amy's next round of therapy will be what's called consolidation therapy. And eventually a stem cell transplant.

When you're thrown into something that "changes you" to quote Amy, you start to pay more attention to the things that seem to really matter. Perspective shifts. Missing a workout suddenly seems trivial. Especially when you are able to walk out of the hospital after 6 weeks of seeing only artificial light. Even if only for 72 hours. Healthcare matters. It's unbelievable that our country still has shit-fights about it. Family and friends matter. I've said it over and over, but it sucks that it can take something like this for people to re-connect.

Next week we will be in Houston at MD Anderson to meet their Stem Cell Transplant team. The staff at Texas Oncology and Seton have been really really professional. If you can have a good experience at a hospital, we had one, that's a follow-up for another time.

We'll continue to get results. The latest were good. But, I might wear a cup just in case.