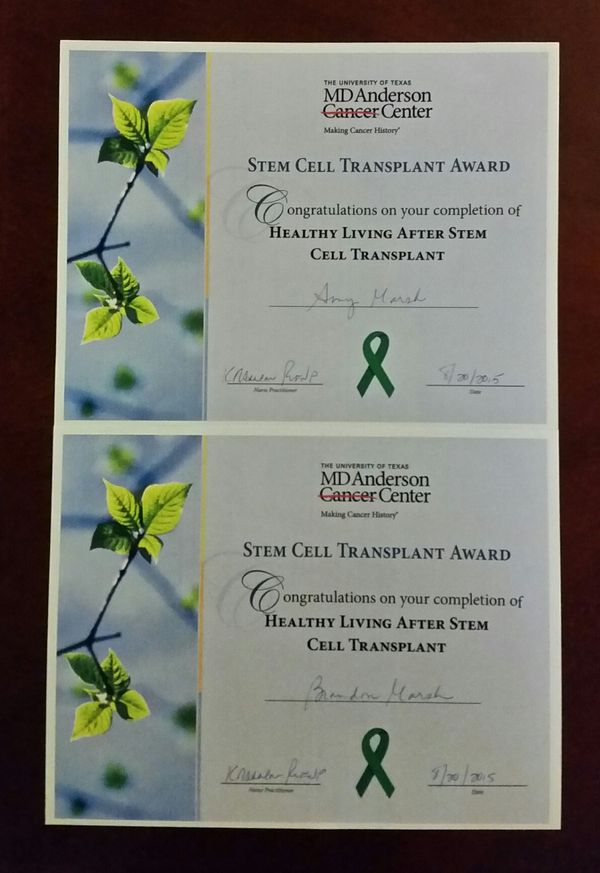 I feel like this update would be better served coming from Amy. We went to a "Healthy Living After Stem Cell Transplant" class Thursday of last week. It was a class of three: the instructor who was a nurse of 23 years in stem cell transplant, Amy, and me.

Amy should really be writing this because she is the survivor. "Someone with a cancer diagnosis from the time of diagnosis for the rest of their life" is on the cover page of the materials we received from the class. It will take quite a bit before she writes. This hasn't been a journey of only 2 as those who have followed along have been on it. Having been by her side all but about 6 days during the entire process, I also received a certificate. Those who have followed along via the web or any other way, thank you.

Last week we had a 2 hour course on what we might expect over the next 2 years. Topics that I am sure I'll cover in these updates, most but not all of them! It ran the gamut. Sex, yep talked about that but won't write about it. Types of food to eat and avoid, talked about that too. Home remodeling, that's out. No dust and dirt. Copious amounts of hand-washing, 20 times per day and sanitizer. Visitors. We just might ask you to mask up, but certainly you are going to wash your hands as soon as you set foot in our house. Indoor pools and swimming are out for Amy for at least 3 more months...that one hurt. Flu vaccine, Amy will get one. I will get one. You will get one. At least if you want to see us between October and April. It needs to be the shot not the mist. Getting back to work, both of us. Talked about that.

Loosely planning and planning loosely as I wrote a bit back.

The Healthy Living is for patients between days 70 and 100. The plan was a rough outline for the next 2 years, but it goes further beyond that. One of the main goals is to help "prevent or minimize the impact of any potential late effect of treatment." From now on. Wherever we move, if we move, this will go with us. A lot of it is common sense, but at times we've tossed that out the window so it was a really good reminder of what to do and what not to do.

Once again though, it is kind of weird to be trying to plan anything. The only constant since December has seemed to be that extended hospital visits and stays were in the future. It is with that we plan on our return to Austin, monthly trips back to Houston that turn into every 3 months. We'll coordinate with our Texas Oncology Dr sooner rather than later. The list goes on. I'm sure it holds a bit here, but failing to plan is planning to fail...

Further down on the first page of the material we received is this "National Institutes of Health include patient's family, friends, and caregivers in the definition of a cancer survivor." Like I wrote above, it's more than a journey of 1 or 2. If we could give each of you a certificate we would.