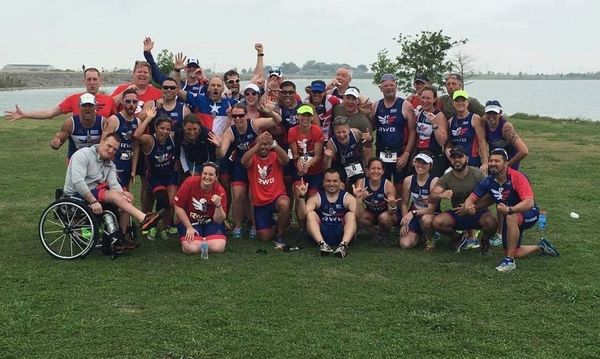 I was reminded not long ago, seems someone commonly does, that there had not been an update to the website about Amy's progress. It is a welcomed reminder since it is an indication that people are still following.

She's progressing well. They said the first year after transplant is expected to be up and down. That typically the second year trends more upwards. Amy has been doing well. Again, I tend to try to slow her down at times. She's active daily. She is back to coaching 2x a week sometimes 3x.

Things move forward there and continue to go well. We were in Houston last week for an appointment and will be back in a month and a half or so for her 1 year appointment.

And yes, this update is "just" another update. It was prompted more by the fact that I was asked to be a coach at the Team Red, White, and Blue tri camp that has found a home in Austin the last 5 years. The TriCamp is about the fundamentals of triathlon and learning about triathlon in general. But, it also had a leadership focus, at least it did this year. One of the purposes was to provide the selected campers the tools they needed to go back into their respective communities and be leaders in their chapter.

Joe Quinn, the Director of Leadership Development, spoke on leadership at the camp. It was good to hear an actual curriculum because it reinforced a lot of what I felt like it took to be a leader or what it felt like to try to relate. I did not "have" to sit in on the leadership talks but I did.

Empathetic leadership. Authentic leadership. Genuine leadership. Those were the main points. It's not limited to leaders, that was also driven home. Strive to be empathetic, authentic, genuine. Every. Day. If you don't know what empathy is, look it up or watch the video. More and more those are the ways that I try to live my life. Try. Every. Day.

I was a civilian surrounded by veterans and a handful of veteran supporters who had been selected to attend the camp. Civilian. Veterans. People.

Coaching and talking about triathlon would be easy. I figured the similarity would end there. Even though I was familiar with many of the works the curriculum was based on and had done the supplemental study, I figured it'd be a little of a stretch to relate. Within the first few minutes of Joe's Friday session I was struck by the similarities between what Amy and I have been through and what some of the veterans and veteran supporters had been through. Vastly different paths, seemingly parallel roads, and I guess that is what empathy and connection is about.

Joe wrote a post on shame and guilt, two topics that Brene Brown talks about. He also wrote..."Lastly, if there is even one veteran reading this, or even one human being,.. " One, He'd hoped to reach 1. Me commenting any more about Joe's message and post would take away from his message. He heard from many, over 250 personal notes and emails in addition to comments. Many of them were cancer survivors. Different paths, parallel roads.

I wrote it very early in these updates that we are overly focused on differences whereas cancer doesn't care. Part of that post is below. One of the campers named Fab made the same point in the Saturday leadership sessions. His point was that we make it to be about differentiating left or right or blue lives or black lives. But, it's not about that. It's about being people, just people.

"We seem to be overly focused on differences and polarization these days. It's more about how different we are than anything. Or how exceptional one group over another. One thing that is for certain, everyone who is down here in Houston at MDA is here for the same reason. And unfortunately that reason is Cancer. And it doesn't care who you are nor does it care where you're from. And the sooner that 'we'...the big 'we' as in humanity...realize we are more similar than different, the better place this will be."

Need a primer on empathy...