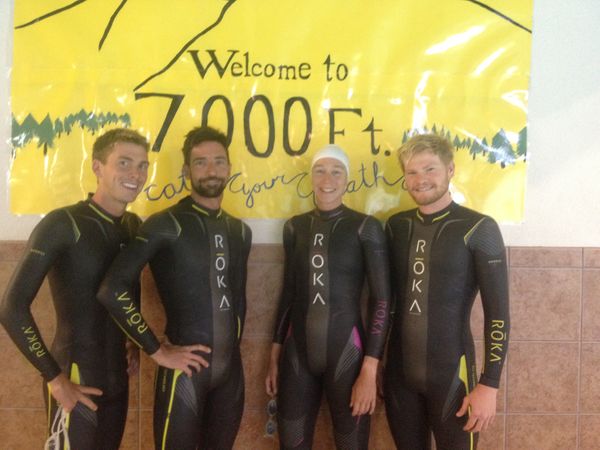 Buffalo Springs is a race that I love, seriously. It's a race that I hate, it's hard. I love to hate it. The race, not the 70.3 race, but the Buffalo Springs Lake Triathlon directed by Mike and Marti Greer celebrated its 25th year this year. I have been racing for 25 years. I was trying to sort out, with help from Mike and his wall of race tees, the first year that I headed west to Lubbock. I think that it was about 1991 or 1992. Certainly in 1993 I raced the race after winning the Texas State Championship in Dallas a month earlier. It was an Olympic distance then. Anyway, I actually like Lubbock.

Prior to that, we were back in Flagstaff, AZ for about 3.5 weeks. That was 2 weeks after Ironman TX. Altitude, recovery. As Paulo said "We go to Flagstaff because it's hard." I could live there. Training there is challenging. But, it was good to be with the Triathlon Squad for a few weeks. I find myself the caboose on most of the runs with the guys. It's good to take a break not necessarily from 'Austin', but from the routine of home.

Routine is comforting. Habit is comforting. Getting out of the comfort zone and breaking habits is good. Sit in a different chair one day or sleep on the other side of the bed. Pick something hard.