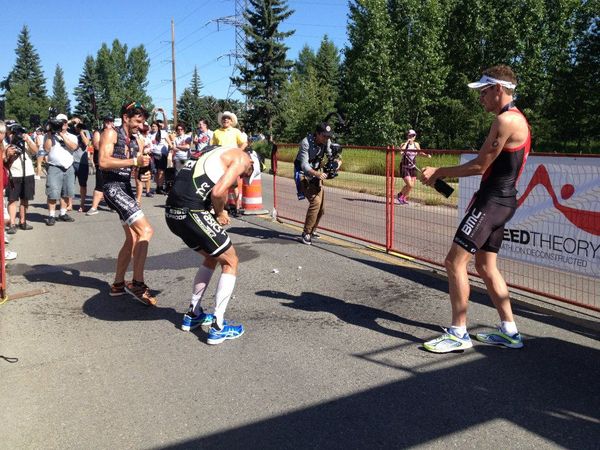 If you're keeping up here, one of our loyal readers, you know that I (Brandon) called an audible on racing Calgary. I am actually really pleased that we did. Calgary is a really nice place. Actually the whole of Canada seems like a great place. Tim Horton's is good stuff. I'm still not really sure what Poutine is all about.

In the picture shown, Will Clarke is to the right. Will was 2nd across the line, but won the race to pop the top on the champagne. Andy Potts is in the middle. He was 1st across the line and 2nd in the champagne contest. I am on the left. I was 3rd in both contests. But, at one point I wasn't even sure I was going to be in the hunt for anything.

That point happened about 20 seconds into the race start. My beach/running start was terrible. I was last 50m into the race. Two things were going through my mind. First was that I hoped Amy would not start where I did. Second was that I should have gone to Ohio after all. I would end up following Andy out of the swim by about 30 seconds and the main group was within a minute or so behind me.

Jordan took control of the bike. He didn't want to relinquish the lead. I got dropped at 40k. Made a heroic effort to get back on. Rapp hit the gas at mile 40, Will got dropped as did I. I went around Will for the last 5-10 miles and we started the run...Rapp, then Potts, with Will and me about 1 minute back.

With 2k to go in the run I passed Jordan to move into 3rd. He finished and said we can no longer be friends.

Again thanks to all of those who have helped us live the life of a professional triathlete. The support from Ashworth Awards, an IM partner, has been great. Cervelo has continued to ensure that the legs and not the bikes are the limiters. Thanks also to Roka, First Endurance, and Cobb Cycling. You can find our other supporters here.

I leave you with the start video. I'm in the green cap. On the left. In last about the time the video cuts out.