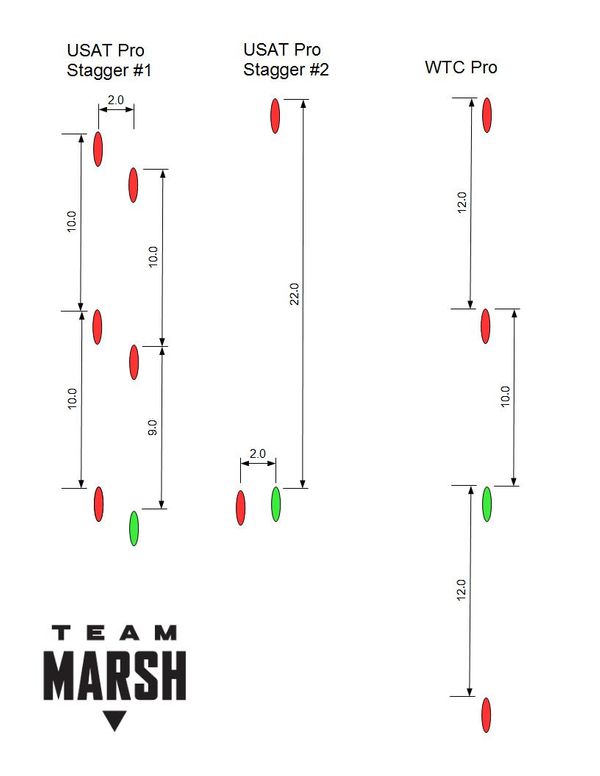 This is my follow-up on the Pro Draft Rules Tutorial. And, like I said about racing the Rev3 Quassy event vs. any number of non-Rev races that same weekend...I am about triathlon. I am not anti-USAT or anti-WTC or pro-WTC or pro-USAT. I'm about triathlon. And, if PROTA or the USAT AAC want to say that they are here to help the professionals, then they should stand up and do that. Likewise, pros need to voice their opinions either in pro meetings, via emails to board members or race directors. Or via somewhat well informed or well intentioned posts. That's what I am trying to accomplish or provide here. And, if you don't like what I have to say...here's a picture for you.

Now, you might read this and think...that's good Brandon why don't you run for office? I'll tell you. a) I'm still racing, b) I have coaching that I am doing, and c) A and B would prevent me from doing my best job at being a representative right now.

Here's another graphic, this one is also to scale.

- USAT Stagger is just what it says. The line markings are standard USDOT transportation markings for roads that have them. My commentary is that (in this example) you are able to legally place 4 riders in a space that is roughly 11 meters long and <4 meters wide. I feel that this is usafe, unfair, and a bit archaic. If USAT is listening or reading, this needs to be reconsidered. I will post two quotes below the descriptions. If PROTA is reading or listening, then I think that this is a seemingly small item that they could pitch to USAT. Opinions, well everyone has one. But, I am of the opinion if something relatively 'small' in the grand scheme of things cannot be considered, then how in the world are we going to consider what some pros consider the larger issues...like doping.

- WTC Pro is just what it says. WTC made the decision at Kona a few years ago to use the USDOT line markings to determine draft distance. This is a nearly fool proof way to determin if an athlete is drafting. The space between lines is 9 meters. The length of a line is 3 meters. Therefore, a 12 meter front wheel to front wheel draft zone is easily marked provided these lines exist. There are pros who disagree, but this is a good standard and relatively easy to measure in the grand scheme of things. As long as officials are comfortable making the calls, are fair in the calls, and are consistent in the calls, then I am in favor of this being a nearly global standard.

- Possible is simply an adjustment on the WTC pro rules. It's one line longer. The trick here is that you cannot use the lines as a completely consistent marker as you can above. The math just doesn't work out. 12 meters is easy to measure given the line spacings. Pros will be used to it. Officials will be used to it.

From a PROTA board member in reply to my email asking that the USAT stagger rule be given a review: "Unfortunately that is not going to happen. It is a much better rule than the age group rule/WTC and it makes it much clearer as to who is drafting and not drafting. My bigger problems is how officials call the rules... I wish they would have video of it or something. Honestly, I think we should be fighting to end drafting on the swim and run since you cant draft on the bike."

My commentary. This board member clearly does not know with 100% certainty how the stagger rule works. There is only 1 time when it is very easy to tell that a rider is drafting and that is when there are 2-3 riders relatively close and 2 of them are not staggered. Any time you add a 4 or more rider it appears that the riders are drafting even though they may not be. And as stated before an official is no watching a) rider front/back spacing b) rider side/side spacing and c) rider passing intervals of 15 seconds.

From a fellow professional athlete on a previous Team-Marsh Blog: "But the reason I’ve been in favor of the stagger rule for years is that it leaves no question in the mind of the official as to whether you’re in violation of the rule. They don’t have to judge 8 meters vs. 10 vs. 12 - they just have to see that you’ve moved over from the person in front of you. The only time you have to stagger the full width is if you are within the draft zone. I find there is less cheating with the USAT rule than with the WTC rule, and cheating drives me crazy. What if we all lobbied for a bigger draft zone without a stagger? Would that help make things safer and solve the cheating problem? If so, I’d be in favor of that"

My commentary. See my other comments about telling when athletes are drafting or not in the stagger rule. But, this quote is telling as well since the athlete essentially is requesting a longer zone (than 10m) without a stagger. A zone that is similar to that used by ITU and WTC and Triathlon Australia for example. A longer zone without a stagger. That's what the WTC and ITU use. So, get rid of the stagger and increase the 10 meters.

So, drafting rules now...how about some wetsuit updates as well. ITU has a pretty good handle on those as does USAT. See, I'm not totally for or against either side! ITU/WTC drafting rules...update USAT's crazy rule. ITU/USAT wetsuit rules for pros...update the WTC's 76 degree rule.

Anyway, a lengthy blog. People have short attention spans nowdays. Thanks for sticking around if you made it this far. If you agree, comment, retweet, send to someone.