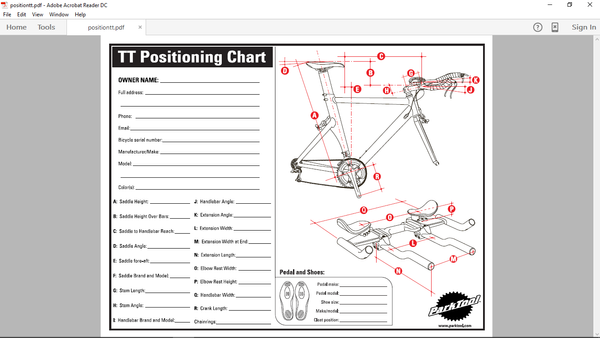 Last week we headed back to Houston. It was a 2-fer. 1-fer was for another MD Anderson appointment. The 2-fer was that I met with one of my athletes down there. We wanted to look at the fit on her bike. More precisely, she had 2 bikes, one that she could ride all day and her 'race' bike which was uncomfortable after 90 minutes or so.

My advice to you is to seek out the nearest qualified fitter. Ask around to see who is recommended. A 'computerized' fit is typically only as good as the fitter behind the computer...

This particular athlete has 3 bikes: one that stays on the trainer, one that was raced last season, and one that was raced previously but will be used in 2016. All three bikes were tri/TT bikes. As someone who has ridden multiple bikes in the past, I am leery when an athlete of mine has more than one bike. Leery because, more often that not, I find one or more of the following occurs:

Let's keep this simple. Take care of the bigger possible issues first. If you have multiple TT/Tri bikes:

The switching of bikes typically occurs when a race bike is loaded for transport. This is at least 1, sometimes as many as 2 weeks before race day. The most difficult part of racing is getting to the starting line healthy, so make sure your back up bike is as close to your race bike as possible. Reduce the chance of an injury popping up because of bike measurements. If you ride 2 TT bikes...do what it takes and spend the money to make the measurements the same.

In the past, I have ridden a tri and road bike during the season. I would ride the road bike during the 'off season' and on easier rides during race season. For my bike fits between these two bikes I kept the same pedals and shoes. My saddle setback on the road bike was slightly further behind the bottom bracket, and the saddle height was slightly lower. Those are good starting points IF you must ride 2 bikes. If you know that you are going to ship a bike to race, take the steps to make sure both bikes fit you close to the same BEFORE you load up your 'race bike'.